Containers are a great solution for consistent software deployments. When you start using containers in your environment, you and your team will quickly realise that you need a system which allows you to automate container operations. You need a system to keep your containers running when stuff breaks (which always happens, expect failure!), be able to scale up and down, and which is also extensible, so you can interact with it or built upon it to get the functionality you need. The most popular system for deploying, scaling and managing containerized applications is Kubernetes.

Kubernetes is a great piece of software. It includes all the functionality you'll initially need to deploy, scale and operate your containers, as well as more advanced options for customising exactly how your containers are managed. A number of companies provide managed Kubernetes-as-a-service, but there are still plenty of use-cases that need to run on bare metal to meet regulatory requirements, use existing investments in hardware, or for other reasons. In this post we will use Rancher Kubernetes Engine (rke) to deploy a Kubernetes cluster on any machine you prefer, install the NGINX ingress controller, and setup dynamic load balancing across containers, using that NGINX ingress controller.

Let's briefly go through the Kubernetes components before we deploy them. You can use the picture below for visualisation. Thanks to Lucas Käldström for creating this (@kubernetesonarm), used in his presentation on KubeCon. 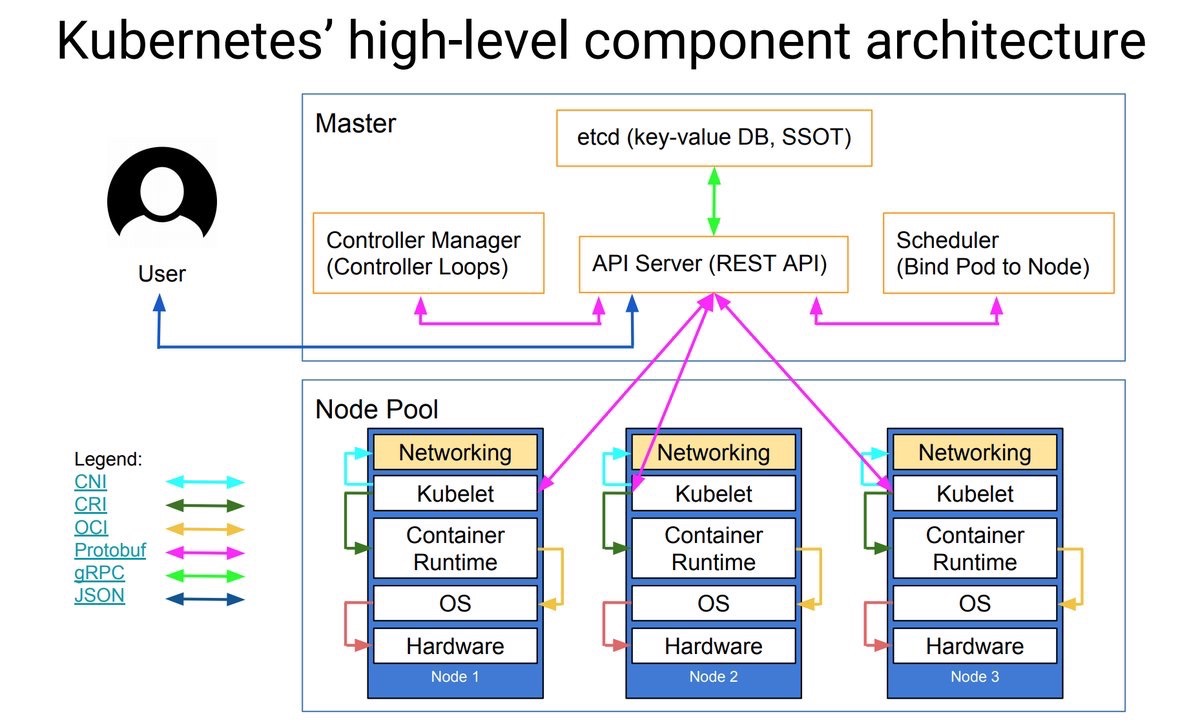 Using rke, we can define 3 roles for our hosts:

For more information on Kubernetes components, see the Kubernetes documentation.

You need at least OpenSSH server 7 installed on your host, so rke can use it to tunnel to the Docker socket. Please note that there is a known issue when connecting as the root user on RHEL/CentOS based systems, you should use an other user on these systems.

SSH key authentication will be used to setup an SSH tunnel to the Docker socket, to launch the needed containers for Kubernetes to function. Tutorials how to set this up, can be found for Linux and Windows

Make sure you have either swap disabled on the host, or configure the following in cluster.yml for kubelet (we will generate cluster.yml in the next step)

The hosts need to run Linux and use Docker version 1.12.6, 1.13.1 or 17.03.2. These are the Docker versions that are validated for Kubernetes 1.8, which we will be deploying. For easy installation of Docker, Rancher provides shell scripts to install a specific Docker version. For this setup we will be using 17.03.2 which you can install using (for other versions, see https://github.com/rancher/install-docker):

If you are not using the root user to connect to the host, make sure the user you are using can access the Docker socket (/var/run/docker.sock) on the host. This can be achieved by adding the user to the docker group (e.g. by using sudo usermod -aG docker your_username). For complete instructions, see the Docker documentation.

The network ports that will be used by rke are port 22 (to all hosts, for SSH) and port 6443 (to the master node, Kubernetes API).

Note: in the examples we are using rke_darwin-amd64, which is the binary for MacOS. If you are using Linux, replace that with rke_linux-amd64.

Before we can use rke, we need to get the latest rke release, at the moment this is v0.0.8-dev. Download rke v0.0.8-dev from the GitHub release page, and place in a rke directory. We will be using this directory to create the cluster configuration file cluster.yml. Open a terminal, make sure you are in your rke directory (or that rke_darwin-amd64 is in your $PATH), and run ./rke_darwin-amd64 config. Pay close attention to specifying the correct SSH Private Key Path and the SSH User of host:

You can always check or edit the file (cluster.yml) if you made a typo or used the wrong IP address somewhere.

We are now ready to let rke create the cluster for us (specifying --config is only necessary when cluster.yml is not present in the same directory where you are running the rke command)

All done! Your Kubernetes cluster is up and running in under 5 minutes, and most of that time was spent on pulling the needed Docker images.

The most common way to interact with Kubernetes is using kubectl. After the cluster has been setup, rke generates a ready-to-use configuration file which you can use with kubectl, called .kube_config_cluster.yml. Before we can use the file, you will need to install kubectl. Please refer to Kubernetes documentation on how to do this for your operating system.

Note: the Kubernetes documentation helps you to place the downloaded binary in a directory in your $PATH. The following commands are based on having kubectl in your PATH.

When you have kubectl installed, make sure you execute the comand in the rke directory (because we point to .kube_config_cluster.yml in that directory).

Now you can check the cluster by getting the node status:

Note: as reference to each node, we will be using IP_MASTER_HOST, IP_WORKER_HOST and IP_WORKER_LB_HOST to identify respectively the master, worker, and the worker functioning as entrypoint (loadbalancer)

Three node cluster ready to run some containers. In the beginning I noted that we are going to use one worker node as loadbalancer, but at this point we can't differentiate both worker nodes. We need to use a host with the role worker. Let's make that possible by adding a label to that node:

Great, let's check if it was applied correctly:

Note: If you mistakenly applied the label to the wrong host, you can remove it by adding a minus to the end of the label (e.g. kubectl --kubeconfig .kube_config_cluster.yml label nodes IP_WORKER_LB_HOST role=loadbalancer-)

Helm is the package manager for Kubernetes, and allows you to easily install applications to your cluster. Helm uses charts to deploy applications; a chart is a collection of files that describe a related set of Kubernetes resources. Helm needs two components: a client (helm) and a server (tiller). Helm binaries are provided for all major platforms, download one and make sure it's available on your commandline (move it to a location in your $PATH). When installed correctly, you should be able to run helm help from the command line.

We bootstrap Helm by using the helm client to install tiller to the cluster. The helm command can use the same Kubernetes configuration file generated by rke. We tell helm which configuration to use by setting the KUBECONFIG environment variable as shown below:

Assuming all went well, we can now check if Tiller is running by asking for the running version. Server should return a version here, as it will query the server side component (Tiller). It may take a minute to get Tiller started.

A little bit on Pods, Services and Service Types

Services enable us to use service discovery within a Kubernetes cluster. Services allow us to use abstraction for one or more pods in your cluster. What is a pod? A pod is a set of one or more containers (usually Docker containers), with shared networking and storage. If you run a pod in your cluster, you usually would end up having two problems:

By default, a Service will have the service type of ClusterIP. Which means it gets an internally accesible IP, which you can use to access your pods. The way the service knows what pods to target is by using a Label Selector. This will tell the Service to look for what labels on the pod to target.

Other service types are:

*NOTE: Another option is to use NodePort , which will use a port from the cluster defined range (30000-32767). You can use an external loadbalancer to loadbalance to this port on the node. For the simplicity of this post, I went for hostNetwork.*

Run the following command to see if the deployment was successful, we should see

Excellent, we reached the NGINX ingress controller. As there are no services defined, we get routed to the default backend which returns a 404.

For this post, I decided to make a single host the entrypoint to the cluster. We applied the label role=loadbalancer to this host, and used it to schedule the deploy of the NGINX ingress controller. Now you can point a wildcard DNS record (*.kubernetes.yourdomain.com for example), to this IP. This will make sure that the hostname we will use for our demo application, will end it up on the host running the NGINX ingress controller (our designated entrypoint). In DNS terminology this would be (in this example, $LOADBALANCER is 10.10.10.10)

With this configured, you can try reaching the default backend by running the curl to a host which resides under this wildcard record, i.e. dummy.kubernetes.yourdomain.com.

Running and accessing the demo application

A little bit on ReplicaSet, Deployment and Ingress

Before we deploy our demo application, some explanation is needed on the terminology. Earlier, we talked about Services and services types to provide access to your pod/group of pods. And that running pods alone is not a failure-tolerant way of running your workload. To make this better, we can use a ReplicaSet. The basic functionality of a ReplicaSet is to run a specified number of pods. This would solve our problem of running single pods.

From the Kubernetes documentation:

While ReplicaSets can be used independently, today it’s mainly used by Deployments as a mechanism to orchestrate pod creation, deletion and updates. When you use Deployments you don’t have to worry about managing the ReplicaSets that they create. Deployments own and manage their ReplicaSets.

Deployments give us some other nice benefits, like checking the rollout status using kubectl rollout status. We will be using this when we deploy our demo application.

Let's create the files necessary to deploy our application, we'll be using a Deployment to create a ReplicaSet with 2 replicas and a Service to link our ingress to. Save to following as docker-demo.yml in the rke directory.

Again, like in the previous deployment, we can query the deployment for its rollout status:

With this running, the web application is now accessible within the cluster. This is great when you need to connect web applications with backends like key-value stores, databases etcetera. For now, we just want this web application to be available through our loadbalancer. As we've already deployed the NGINX ingress controller before, we can now make our application accessible by using an Ingress resource. Let's create the ingress.yml file:

This is a fairly standard Ingress definition, we define a name and rules to access an application. We define the host that should be matched docker-demo.kubernetes.yourdomain.com, and what path should route to what backend service on what port. The annotation kubernetes.io/ingress.class: "nginx" tells the NGINX ingress controller that this Ingress resource should be processed. When this Ingress is created, the NGINX ingress controller will see it, process the rules (in this case, create a "vhost" and point it the backend/upstream to the created pods in the ReplicaSet created by the Deployment ). This means, after creation, you should be able to reach this web application on http://docker-demo.kubernetes.yourdomain.com. Let's launch the ingress and find out:

Check out the web application on http://docker-demo.kubernetes.yourdomain.com

Is this a full blown production setup? No. Keep in mind that it will need some work, but hopefully you have gained a basic understanding of some of the core parts of Kubernetes, how to deploy Kubernetes using rke, how to use Helm and the basics of the NGINX ingress controller. Let me give you some resources to continue the journey: